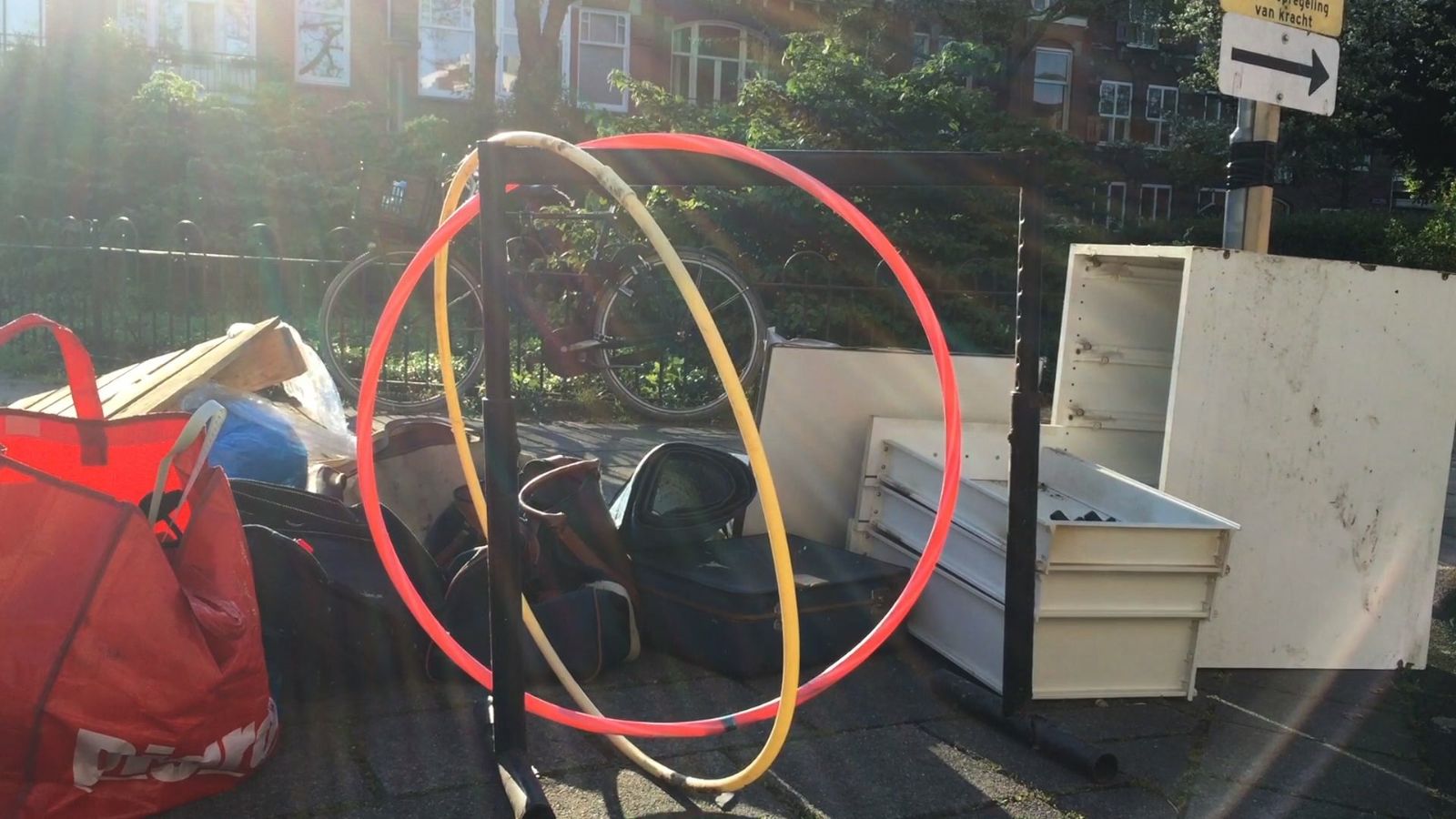 Overlap is Marijke van Warmerdam's seventh exhibition at Galleri Riis. Co-curated by Els Barents, it features a cross section of works by the Dutch artist, including films, photographs and objects.

In all her works Van Warmerdam does something to our perception of the world. The world, in this case, is a small glimpse of situations and places presented in multimedia where time is essential.

The art of Marijke van Warmerdam is comforting in many ways. Her works may relate to common objects like hula hoops, blankets, a suitcase, or a cup of coffee. Yet, there is a spiritual quality to her works that transcends the ordinary. The image of a waving hand on a pillow wishing you goodnight. An elephant blinking its eye. The explicitness makes the mundane stand in the spotlight. In the film Overlap, which lends its name to the exhibition, the swaying of hula hoops portrays the eternal movement and mystery of time. Marijke Van Warmerdam's take on the familiar, however soothing, is full of subtle surprises. Serendipity is at play.

Van Warmerdam and Barents have created a day part and a night part in the two exhibition spaces of the gallery. The day part positions Van Warmerdam's recent film Fast Forward opposite the short films Rrrolle- red and Rrrolle- blue. The former shows how a red, robotic suitcase descends a snowy mountain on its very own, while the red and the blue parrot in the latter films turn on their perch like top acrobats. Van Warmerdam reaches far beyond the anecdote in order to create a perfect, but highly abstract image, evoking a memory out of context or something strangely familiar. The realm of the night is exemplified by the images of strange clocks on blankets. Here reigns a soothing but dysfunctional world overlooked by another film Het Grote Geheugen (The Big Memory) which shows the tiny movement of an elephants eye. By placing an enhanced and surreal complexity opposite comfort and chaos, Van Warmerdam shows the range of her work in highly contrasting viewpoints.

Overlap is a generous look into van Warmerdam's world.

The works are individual, but inherently connected through a sharp aesthetic, an element of surprise.

Since 1995, Van Warmerdam has shown in international institutions such as the Venice Biennale, Documenta X, Wiener Secession, Migros Museum für Gegenwartskunst, Zürich, Museum Ludwig, Cologne, ICA, Boston, The National Museum, Oslo, IKON Gallery, Birmingham and Magasin 3, Stockholm. From 2011-2014, an extensive retrospective of van Warmerdam's work was held at the Museum Boijmans Van Beuningen in Rotterdam; which later toured to Museum Serralves in Porto and Kunsthalle Düsseldorf. The State Hermitage Museum in St Petersburg presented van Warmerdam's solo exhibition, Time is Ticking, in 2014; and she contributed to the group show The Power of the Avant-Garde in Bozar, Brussels in 2016, which currently is on view in the National Museum in Krakow.

Van Warmerdam lives and works in Amsterdam, and holds a professorship in Karlsruhe at the Staatliche Akademie der Bildenden Künste.

Els Barents has been the first curator for photography at the Stedelijk Museum and founding director of Huis Marseille in Amsterdam.