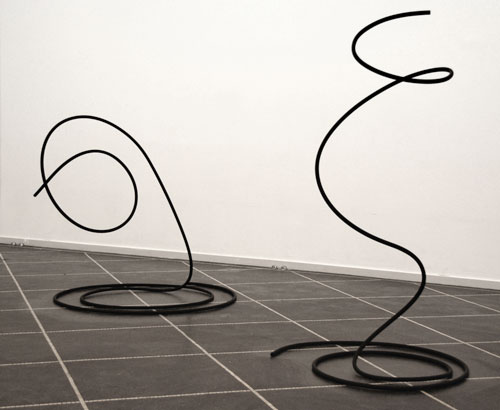 On Thursday the 1st of October we have the pleasure of opening our 4th exhibition with the Dutch artist Marijke van Warmerdam.

Under the title “In the Air" van Warmerdam exhibits works that revolve around buoyancy, spirals and movement. Throughout van Warmerdams production, movement has been a recurring theme. Simple actions are repeated in unending loops. The dwelling upon the often banal actions, result in a concentrated experience, one through which van Warmerdam opens for a meditative universe stimulating to see and perceive in alternate ways.

The exhibition consists of the film loop “Sprong" from 1995, which has given the impulse to a series of new large inkjet prints on canvas. Titled “Up" (2009), the images are stills from the film added white paint in simple yet expressive gestures. Further exhibited are the large sculpture “The Weight of Colour" (2006) - a frozen moment of almost impossible equilibrium - and the new sculpture in two parts “In the Air" (2009) providing the viewer with a feeling of buoyant force.

Marijke van Warmerdam (b. 1959) had her breakthrough in the 90ties, participating in the Venice biennale and Documenta, and has since had an extensive international exhibition activity. Her last major exhibition in Norway was in 2005 at the National Museum for Art, Architecture and Design. She is living and working in Amsterdam, and in Karlsruhe where she is professor at the Staatliche Akademie der Bildenden Künste.