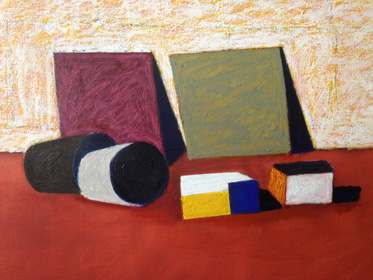 Galleri Riis is proud to announce a new exhibition with recent work by the Finnish painter Paul Osipow, opening on Thursday September 5.

Throughout the greater part of his artistic career and general involvement in the arts, Paul Osipow (b. 1939) has emphasized abstract and non-figurative painting and is a leading exponent of its development within the Nordic art scene, where he continues to inspire new generations of artists. Osipow´s exhibitions in the 1990s revealed his gradual movement away from a pure geometric expression to one more painterly and unrestricted, inspired by the pioneers of modern painting and with extensive samplings from late Impressionism, Cubism and Fauvism. Furthermore, research and experiments with figurative means of expression have- combined with the study- and work periods in Italy of recent years- cemented Osipow's lifelong passion for Renaissance painting. Over the last years he has devoted himself to still-lifes including extensive series of skulls and various foods such as sausages and pastries, as well as a series of female nudes as shown in his previous exhibition wih Galleri Riis in 2010, Les positions préférables.

In the current exhibition, Osipow returns to one of his favoured themes the last decade, the study of miscellaneous ruins from Ancient Greece. In 10 medium to large size paintings in oil on canvas and 12 smaller works on paper, based on his own photos and sketches, he explores two different views within the ruin of a house in Olympia. As usual he attacks the motif with boldness and flair, resulting in a wide range of expressions evoking the crude cartoonlike dystopia of Philip Guston as well as quaint yet elegant and refined interplay of form, colour and texture. With their varying degrees of abstraction and transformative properties, these works take the viewer on a surprising and dizzying ride.

An overview of Osipow's works could be seen in the large retrospective hosted by Kunstnernes Hus in Oslo in 2005, as well as in Amos Anderson Art Museum in Helsinki in 2007. Both exhibitions were accompanied by extensive publications, and Osipow's works can be found in important private and public collections throughout the Nordic countries, a.o. the National Museum of Art, Architecture and Design in Oslo, Moderna Museet in Stockholm, and Kiasma in Helsinki. Paul Osipow lives and works in Helsinki and on various locations in Italy and France.