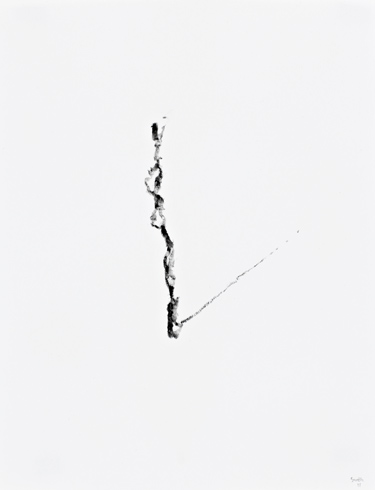 On Thursday, April 26 we have the pleasure of opening an exhibition with new drawings by Jan Groth, the 9th exhibition with the artist since our first in 1985. Groth (b.1938) has through his long artistic practise, exclusively and continuously explored the relationship between line and picture plane. First and foremost in drawings executed with crayon on paper, but also in monumental tapestries made in collaboration with Benedikte Groth. During the last 25 years he has also taken the line into three-dimensional space in bronze sculptures, spanning the intimate scale of the drawings to the monumentality of public works. Almost three decades have past since his extensive solo exhibition at the Guggenheim Museum in New York in 1986. Exhibited worldwide since, his influence and powerful presence in the art world both here and internationally, confirms his position as one of the most important Scandinavian artists in present time. The exhibition consists of 22 smaller drawings produced in the summer of 2011 in the artist's studio in Dagali. The drawings, measuring 27 x 21 cm, represent the latest development in this format that Groth started exploring in the late 90s. In contrast to the distinct patterns and references to writing and letters in those earlier drawings, the new works have a more dissolved structure; the line floating on the surface, creating suspense and space, and in this sense relating to his larger drawings. Groth's drawings are in these works (more than ever) a manifestation of art in its purest shape.

Jan Groth lives and works in Oslo and Dagali and his works could last be seen in the Oslo area in the exhibition Traces and Spaces at the Henie Onstad Art Center and concurrently in Drammen Museum in 2009.