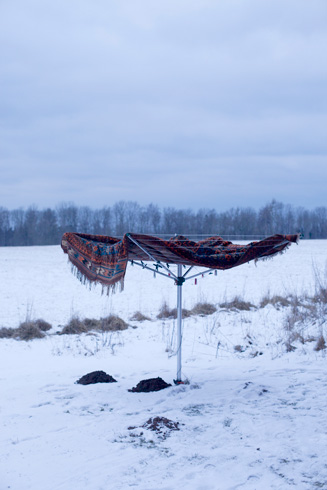 Galleri Riis has the pleasure of presenting our fifth exhibition with the Swedish artist Andreas Eriksson (b. 1975). Working in different media such as painting, sculpture, photography, textile and installation, Eriksson was awarded the Art Balois prize in 2007 for his exhibition in Art Basel Statements, followed by a solo exhibition in MUMOK (Museum Moderner Kunst Stiftung Ludwig in Vienna) in 2008. Last year, he represented Sweden in the Venice Biennial, along with Fia Backström. In Venice the entire Nordic Pavilion was at his disposal. Most of the works exhibited were executed specifically for the pavilion, and were based on observations and experiences from his home district of Hällekis, Västgötland.

Andreas Eriksson has throughout his artistic production been consequent in breaking away from the expected, and has proven wrong those assuming to know his next move. He has throughout worked conceptually, in combination with a keen visual sensibility. A "failure" can for example be a point of departure for new thoughts and works, adding a liberating dimension to the works and process. The uncontrollable and chance are aspects which Eriksson cultivates and encourages, rather than suppresses. In this way the molehills have become a symbol of the unleashed and the unstoppable. Humans often try, with different strategies and techniques, to defeat the moles' underground activity, but fail when facing the small animals' subversive infrastructures. Casting these rebellious and unwanted traces in such a classic material as bronze, induce the molehills with – apart from very spesific sculptural qualities – a fine-tuned and cocky aura. The paintings in this exhibition are reflections on landscape. Enigmatic and dense, some of which so dense that they only after some contemplation convey their content; terrains with hints of archaic shapes, prehistoric fields perhaps or the territory of dreams, one can only sense what they contain. Other paintings are more immediate, activating and pulling you in past the foreground – sometimes through the window bars of the studio – to what lays far into the background of the painting, in the shape of a cave, a field of green or a layer of ochre.

Last fall, Andreas Eriksson held the exhibition "Untitled and other activities" in Galleri Riis, Stockholm. A retrospective exhibition titled "A Second Time" is currently on view in Amos Andeson Artmuseum in Helsinki until May 7 2012, and in the autumn of 2012 Eriksson will participate in "The Imminence of Poetics" at the 30th Sao Paulo Biennial.