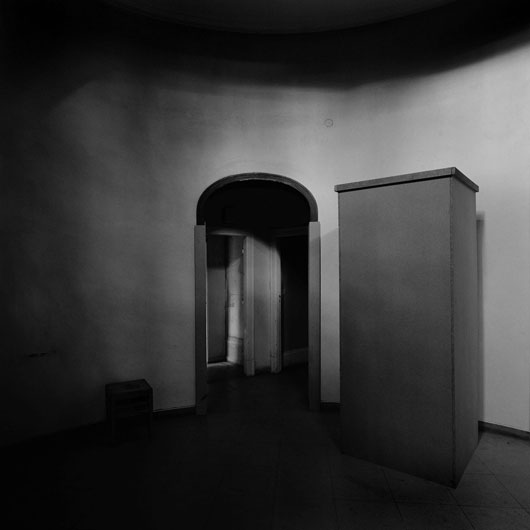 Galleri Riis will in our lounge present a book and a selection of photographs from the project “Villa Wannsee – Melancholy Grandeur" by the German photographer Werner Zellien (b. 1952), who has lived and worked in Norway since 2003.

Zellien's work ranges from photographic reproduction – he is an internationally renowned photographer of artwork – to an artistic practice of either precise documentary photographs or poetic distillates. Zellien's works were last shown the autumn 2008 in the Bergen Art Museum Tower room, where all the 40 pictures in the series were shown in large format. The recordings were done in 1988, before the neo-classical building Villa Wannsee, outside of Berlin, became a memorial museum of the infamous Wannsee-conference held there January 20th 1942, when the nazis cemented the plan of “the final solution" – the industrial extinction of Europe's Jewish population. The photographs' stringent, regular and precise expression reflects the structure which enabled the execution of the genocide. The pictures seem shadowed and silent, filled with the loss of meaning that characterizes melancholy.

The presentation will consist of a selection of new ink-jet prints in smaller format, as well as the actual publication “Villa Wannsee – Melancholy Grandeur" (2008), publsihed on the occasion of the exhibitions in Bergen Art Museum and Galleri Riis. The book is designed and produced by the artist, and includes all the images in the series, as well as texts by Museum Director Audun Eckhoff, and Dr. Iain MacKenzie at the University of Kent.