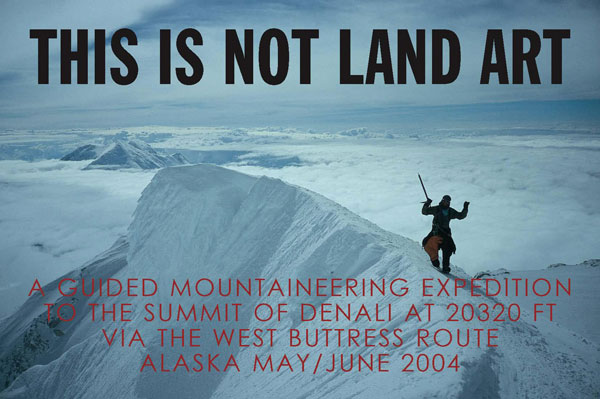 Saturday, March 12, Galleri Riis reopens to the public in its new location in Mohn-Gården, on Filipstadkaia in Oslo with an exhibition of an artwork created especially for the new space by British artist, Hamish Fulton.

Hamish Fulton (b. 1946) has had an international career as an artist for over 30 years, and he has achieved status as a contemporary classic in the art world today. Hamish Fulton has been characterized as a sculptor, photographer, conceptual artist and a "land-art" artist. He characterizes himself as a “walking artist." Galleri Riis has worked with Fulton since 1991. His largest exhibition to date, “Walking Journey", was held at the Tate Britain in 2002.

The walk - or the journey - have been central in Fulton's work since he became determined in 1973 to create art derived from individual walking tours. “No Walk - No Work." Fulton's art embraces a wide spectrum of ideas, but has a clear foundation in the interest for preservation of the natural environment.

Although only Fulton himself directly experiences the walk, the texts and photographs (or other artworks) he presents in exhibitions and books afford us the opportunity to participate in his experience. He says: “My art has to do with specific places and particular occurrences which are not present in the gallery, and the information I give is minimal. My hope is that a separate image will be formed in the observer's mind, based on that which my work imparts."

Fulton's exhibition consists of three works placed together to form one large wall painting with vinyl elements, and it rather effectively takes possession of our new exhibition space. Fulton's art invites contemplation of place and scale, the exploration of uncharted territory, and it is therefore fitting that his work should mark the gallery's reopening and the beginning of our endeavors in this new location.