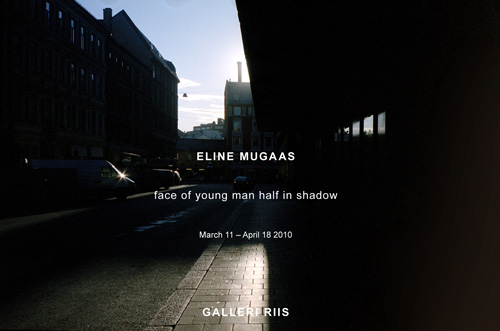 Galleri Riis has the pleasure of presenting our fifth exhibition with the Norwegian artist Eline Mugaas, opening on Thursday March 11th. Mugaas (b. 1969) received her artistic education from The Cooper Union for the Advancement of Science and Art in New York, and is considered one of the leading Norwegian artists working within the photographic medium. In recent years her exhibition activity has been manifold, including the extensive exhibition "some cities" in Bergen Kunsthall autumn 2007, where the theme was images fromBelgrade, Oslo and New York City. Her first film work "skin flick" was exhibited in Galleri Riis spring 2008. During 2009, Mugaas worked with the photo collage-fanzine Album (along with Elise Storsveen), with launches at the Oslo venue 0047, and recently also presented at Printed Matter in New York. The same year she curated the exhibition "The Camera Show" in the Photographers Gallery in Oslo. She also co-exhibited in the collaborative project "Fake Snow" in Galleri Riis along with two fellow alumni of Cooper Union and their professor. Mugaas lives and works in Oslo and New York.

This exhibition consists of roughly 30 new analog color prints in medium and small sizes, in which Mugaas' work has taken a new turn. First and foremost are several interior motifs from the artist's own home, which has proven to be a good point of departure for investigating the possible coexistence of formal composition and accidental information. Mugaas says a.o this about the works: "I wanted to investigate the formal aspects of my work and at the same time not lose the aspect I love the most about photography, its place as a sloppy document. All the information that sneaks in, that later oozes out and can't be stopped and that gives you a voyeur's pleasure by sharing its details. This is what Roland Barthes refers to as the punctum. The little things that intrigue and bother the eye." The exhibition also marks the 5. anniversary of Galleri Riis' activities in the Mohngården building.