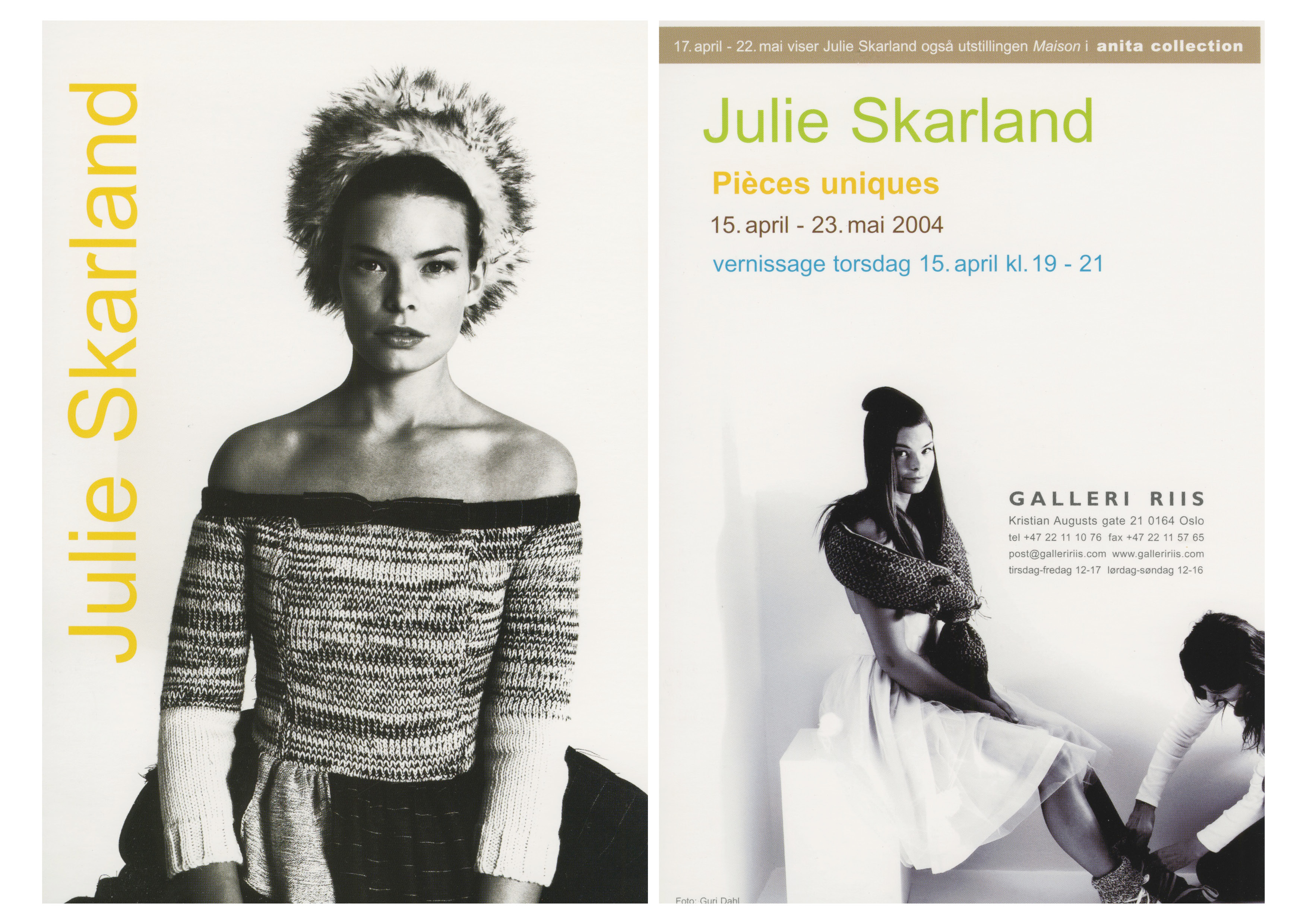 Thursday, April 15th, we have the pleasure of presenting our first exhibition of the work of Julie Skarland.

Julie Skarland was born in 1960 in Trondheim. After studying architecture at NTH (1982), she journeyed to Stockholm's Tillskarerakademi (1983), obtained certification in dress and costume design competence from Brundalen school in Trondheim, and went on to Paris in 1987 where her studies in fashion design continued at Studio Berçot.

Since 1991, Skarland has produced collections under her own name and opened her first boutique in 1998, located on the rue Condorcet in Paris, where she also maintains her studio. She has had fashion shows and presentations of her collections at fashion expositions in Paris, Milan, New York, Oslo, Tokyo and Osaka. Japan has, since the beginning, provided her biggest customer base.

Skarland's work has regularly attracted the attention of the fashion press, with features in “The Face", “Vogue", “Elle", “Glamour" and “Marie Claire". She has participated in a series of group exhibitions in both Norway and France, including “Japonisme et Mode" at the Musée de la Mode et du Costume, “L'Homme- Objet la mode masculine de 1945 à nous jours" at the Musée de la mode Institut mode Méditeranée-Marseilles, as well as “Jouer la lumière" at the Musée de la Mode et du Textile Palais du Louvre Paris. Skarland was last in Norway for the largest retrospective presentation of her work to date at Nordenfjeldske Kunstindustrimuseum in Trondheim, in 2002-03.

In Skarland's artistic working method, ideas are given form quickly, and extensive recycling of found textiles results in an unusually articulate elegance. That distinctive use of contrasts in design and materials is apparent in the elegant cuttings in garments made of old sweaters from the Salvation Army combined with both new, exclusive fabrics and old, “haute couture" textiles.

In 2003, Julie Skarland was awarded the “Year's Designer" award from the Oslo Fashion Awards.

The thirty works exhibited at Galleri Riis are all unique works which have been made in the course of the last year. They will be presented as a sculptural installation on low podiums in the gallery rooms.

From April 17 – May 22, Skarland will also show selections from her first interiors collection at the design gallery, Anita Collection, in Frogner in Oslo.