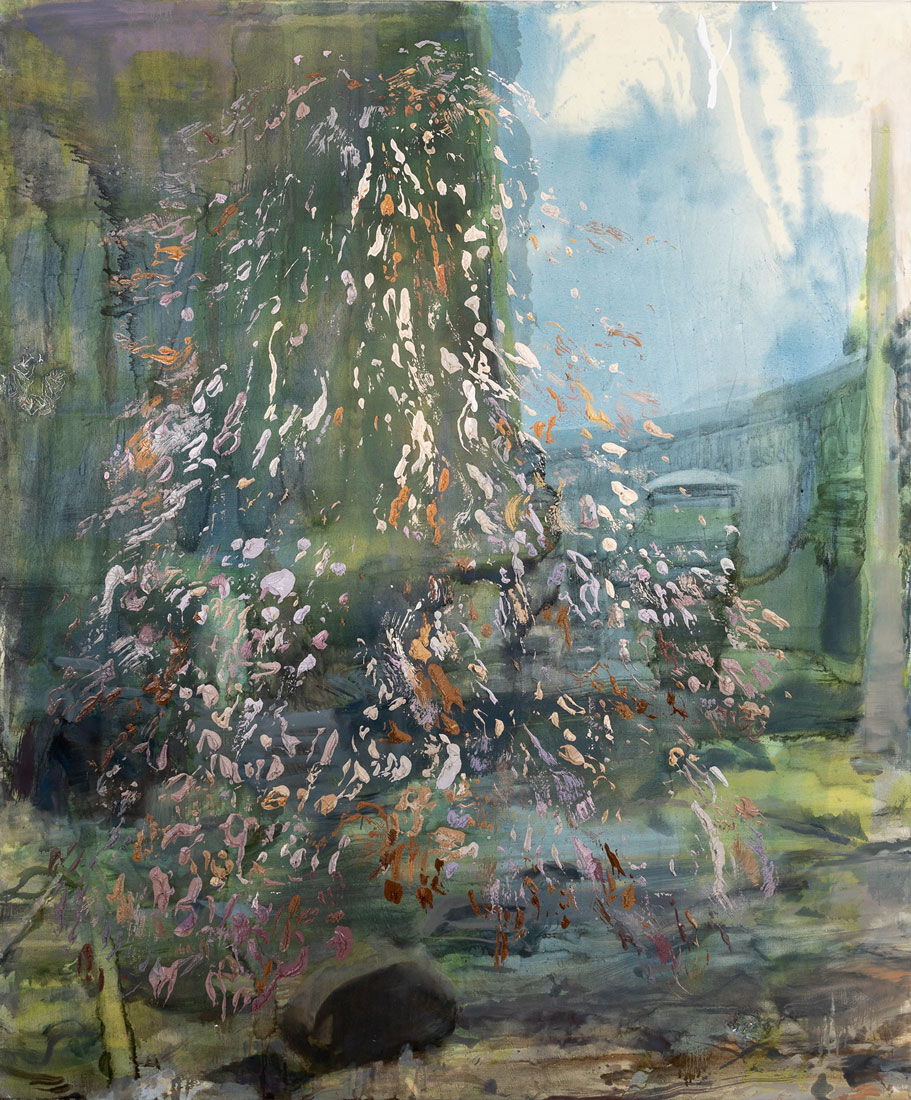 We are pleased to announce an exhibition of new paintings by Hanneline Røgeberg in the gallery's main exhibition space. Entitled To The Ground, it comprises six larger paintings and three groups of smaller paintings, all executed over the last two years.


I paint from archival photos with successive washes, laying down thin membranes of information from events I am thinking about. The ground dries in unpredictable sediments, a geologic record of the time spent making it. I think about canvas and pelts, about figure/ground reversals, about scraping the canvas over bodies to pull them from illusion back up to the ground's surface, about flipping sensory frequencies, about fluency, about whether all actions really are reactions.

My reactive thoughts are detained for a while with pigment and ground resistance. Making sense and connecting dots drive one side of painting, and testing out nonsense and cutting connections to make room for new ones drive another.

A traumatic event blows open the representational net we throw over the world to explain it to ourselves, and later on, this gap compels us to replay the event again and again. The act of painting lets me move back and forth over the gap - is it something or nothing? while the stuff of painting offers a temporary name for it until the net can heal.

In some of Delacroix's history paintings I see him smoothing out the seams in the net, choosing fluency with the previous order over the incoherence and chaos of the aftermath. I lay down more layers, other landscapes, sourced from images of copycat re-strikes of the original event. While the paint is still wet, I transfer the residue of the gap from one painting onto the next. I feel both loss and relief; the ground can't distinguish if my marks are from one site or another, and I am not fluent anymore. I don't have a code.

Often I recognize what I don't want by the fact of it being recognizable. But patterns form, edges align and wet paint from one canvas will leave a reversed scar onto the other, similar but different, suggesting an alternative.

Hanneline Røgeberg was born in 1963 in Oslo, and lives and works in Brooklyn, New York. She holds an MFA from Yale University, CT, and since 2013, she has been a Professor at Mason Gross School of the Arts, Rutgers University in New Brunswick, NJ. Recent solo exhibitions include zeroesandones at Galleri Riis in 2019, Hard Sauce at Thomas Erben Gallery in 2017 and Off the Bone at Blackston Gallery in 2015, both in New York City. Recent group exhibitions includes WALKING. Movements North of Bolzano, The Collection of Erling Kagge, Museion, Bolzano, Italy, in 2020 and Sotto Voce, Bortolami Gallery, New York City, 2019.


Siri Hustvedt* in conversation with Hanneline Røgeberg.
* American novelist and essayist. Hustvedt is the author of a book of poetry, seven novels, two books of essays, and several works of non-fiction.