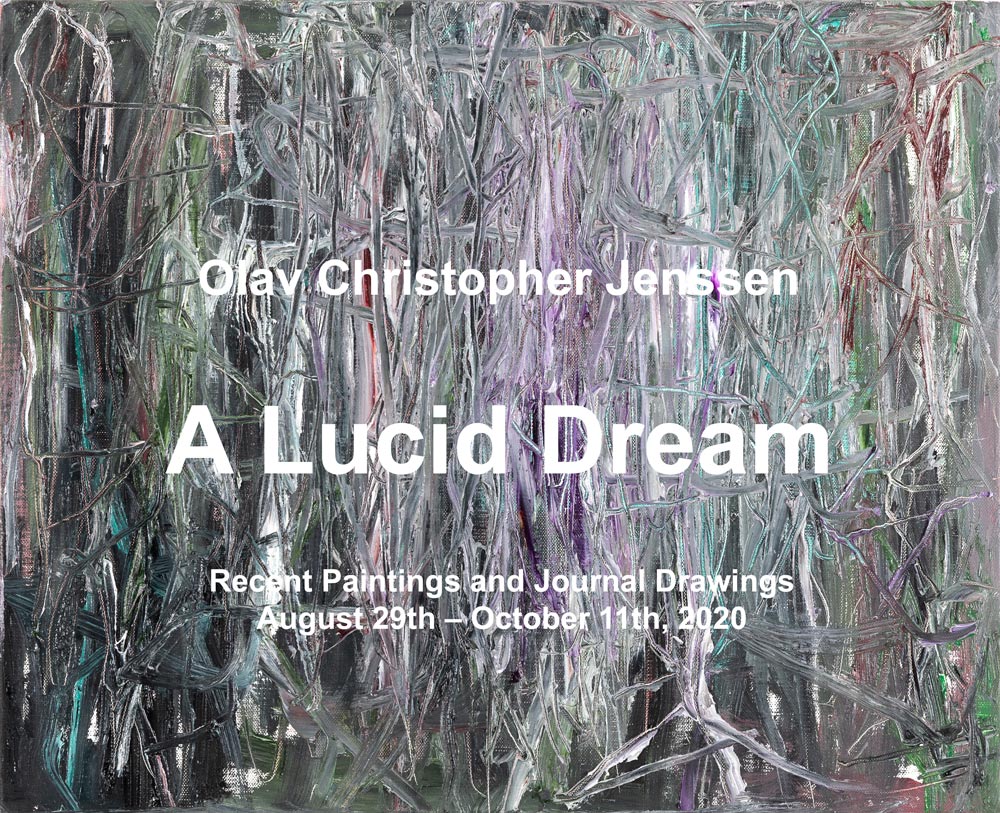 We are pleased to announce our exhibition of recent paintings and Journal drawings by Olav Christopher Jenssen, his 18th with the gallery, since the first in 1985.

The new and modestly sized 'A Lucid Dream' paintings are shimmering veiled windows with pastose brushstrokes in earthly hues that invites us to contemplate the dreamlike realm beyond. The recent 'Rubicon' paintings, in both large and smaller formats, are composed of undulating lines looping in and out of dense bursts of color and light, reminiscent of imaginary forests and underwater worlds. The web of lines connects fluently from painting to painting.

The exhibition also marks the publication of Olav Christopher Jenssens' 'Journal Vol. 06', his latest collection of small drawings which have been executed in various media, on same size waxed paper, since 1986. Altogether the project constitutes an impressive ongoing diary, that gives insight into the artists' flow of ideas and inspiration. This 180 page volume is the most extensive thus far in the series; containing works executed in his studios in Berlin and Lya, Sweden as well as in diverse locations such as Iceland, Japan and the ICE trains in Germany. The publication is a collaboration between Galleri Riis, Oslo, Galleri Ismene, Trondheim and BuchKunst Kleinheinrich in Münster. The exhibition will include fifty drawings from this publication.

Olav Christopher Jenssen (b. 1954 Sortland, Norway) is one of the foremost artists of his generation from the Nordic countries and has gained international recognition for his distinctive and multifaceted paintings, as well as for his idiosyncratic sculptures. His production encompasses drawings, watercolors, paintings, graphic works, book illustrations and books.

Simultaneously working with multiple series and mediums, Jenssen alternates between the different works mentally and physically; from informal and rapidly painted pictures to more strict and formal paintings, in monumental as well as intimate formats. Always exploring and adopting new methods and techniques, his works contain both continuity and diversity. Between these works, a rich visual vocabulary has emerged. The paintings open up a philosophical space for dialogue and reflection, encouraging the viewer to unveil strata of paint and decipher cryptic symbols, as on a journey through the history of abstract painting. Jenssen has over the years produced several public commissions ranging from murals and wall reliefs to freestanding monumental sculptures.

Jenssen lives and works in Berlin and in Lya, Sweden. He was appointed professor at Hochschule für Bildende Künste in Hamburg i 1996, and has since 2007 held a professorship at Hochschule für Bildende Künste Braunschweig in Germany. He is represented in important public collections, including the Museum of Modern Art, New York, Moderna Museet, Stockholm, Astrup Fearnley Museum, Oslo, Centre Pompidou, Paris, Kunstmuseum Bonn, Kiasma, Helsinki, Preussischer Kulturbesitz, Berlin, Marta Herford, Germany and The National Museum of Art, Architecture and Design in Oslo. He has had major exhibitions at the Astrup Fearnley Museum of Modern Art, Oslo, Kiasma Museum of Contemporary Art, Helsinki, and Kunstmuseum Bonn, Germany. Recent exhibitions include «Enigma» Marta Herford, Germany, «Journal - works on paper 1979-2012» Henie Onstad Art Centre, Høvikodden, Norway, «Olav Christopher Jenssen» Saarlandmuseum, Saarbrücken, Germany, «Estragon» Sprengel Museum, Hannover, Germany, and last year he held his most recent museum exhibition at the Astrup Fearnley Museum, an impressive display of all of his works in the museums' collection.