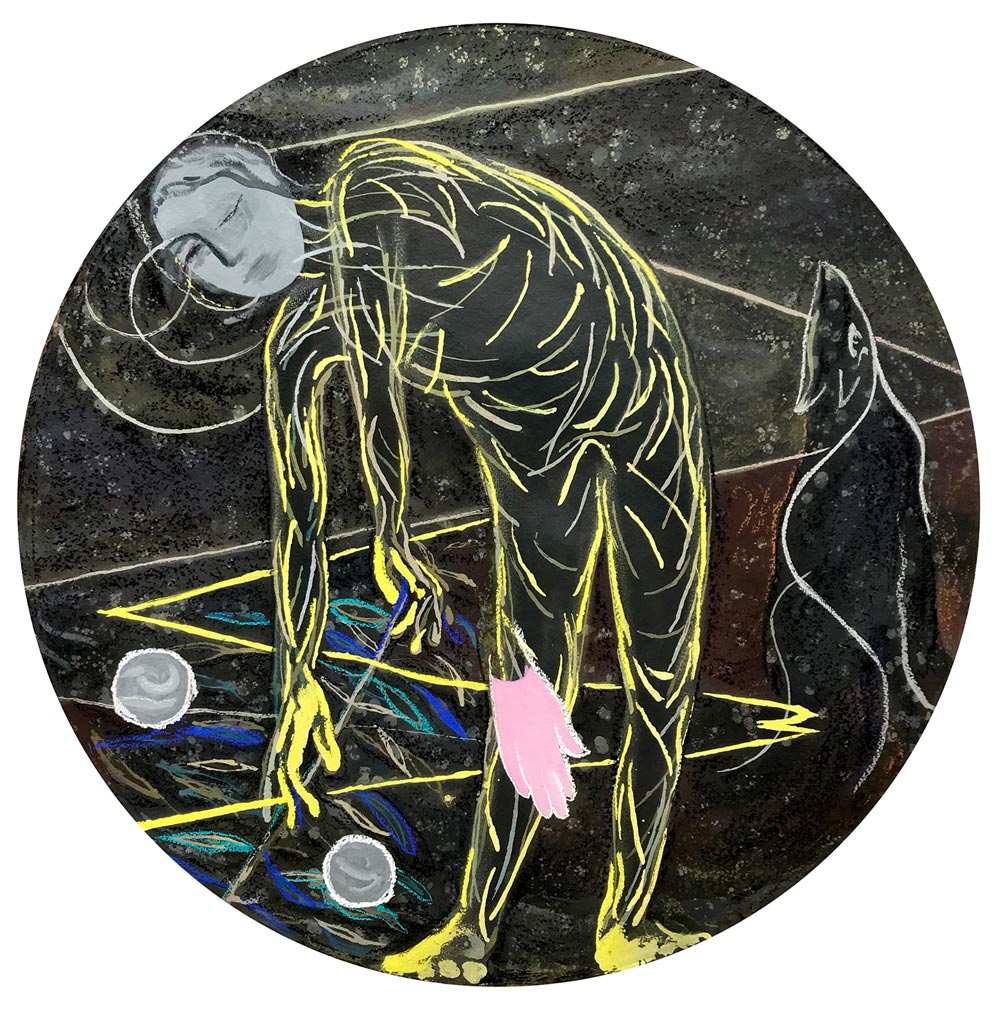 "Of things so dark in verse so clear" is the opening line of one part of Lucretius' (99-55 BC) poem
De Rerum Natura / On The Nature Of Things. It describes the necessity of art in dealing with the core issues at hand; Epicurus' theory of everything, from three centuries earlier. As Lucretius explains, poetry is the sweetener for his foul tasting remedy: "when doctors try to give them the loathsome wormwood, first they smear honey on the goblet's rim....At the lip's edge, and so drink up the juice of bitter medicine, tricked but not betrayed".
The tondo format paintings explore the conventions of framing and viewing images. Lending to the corner-less nature of the round compositions, Homstvedt's cast of characters are given to climb the edges of a suddenly weightless atmosphere. At the lip's edge, a limit is demarcated. What goes on within the body can enter here.

Håvard Homstvedt (b. 1976) lives and works in Oslo. He received his artistic education from Yale University School of Art and Rhode Island School of Design. His paintings have been characterised by their textile-like surfaces and thoroughly treated canvases with varied materiality. He has simultaneously worked with multifaceted sculptural expressions, surreal painted bronze busts, idiosyncratic silhouette figures and reliefs intertwined with paintings in ambitious installations. Sculptures and paintings with a crafted treatment span the gamut from 'high' to 'low' in art, and also points to his interest in finding a method of rendering felt impressions rather than reality.

There is no end,
No limit to the cosmos, above, below,
Around, about, stretching on every side.
This I have proven, but the fact itself
Cries loud in proclamation, nature's deep
Is luminous with proof. The universe
Is infinitely wide; its vastness holds
Innumerable seeds, beyond all count,
Beyond all possibility of number,
Flying along their everlasting ways.
So it must be unthinkable that our sky
And our round world are precious and unique
While all those other motes of matter flit
In idleness, achieve, accomplish nothing,
Especially since this world of ours was made
By natural process, as the atoms came
Together, willy-nilly, quite by chance,
Quite casually and quite intentionless
Knocking against each other, massed, or spaced
So as to colander others through, and cause
Such combinations and conglomerates
As form the origin of mighty things,
Earth, sea and sky, and animals and men.
Face up to this, acknowledge it. I tell you
Over and over — out beyond our world
There are, elsewhere, other assemblages
Of matter, making other worlds. Oh, ours
Is not the only one in air's embrace.