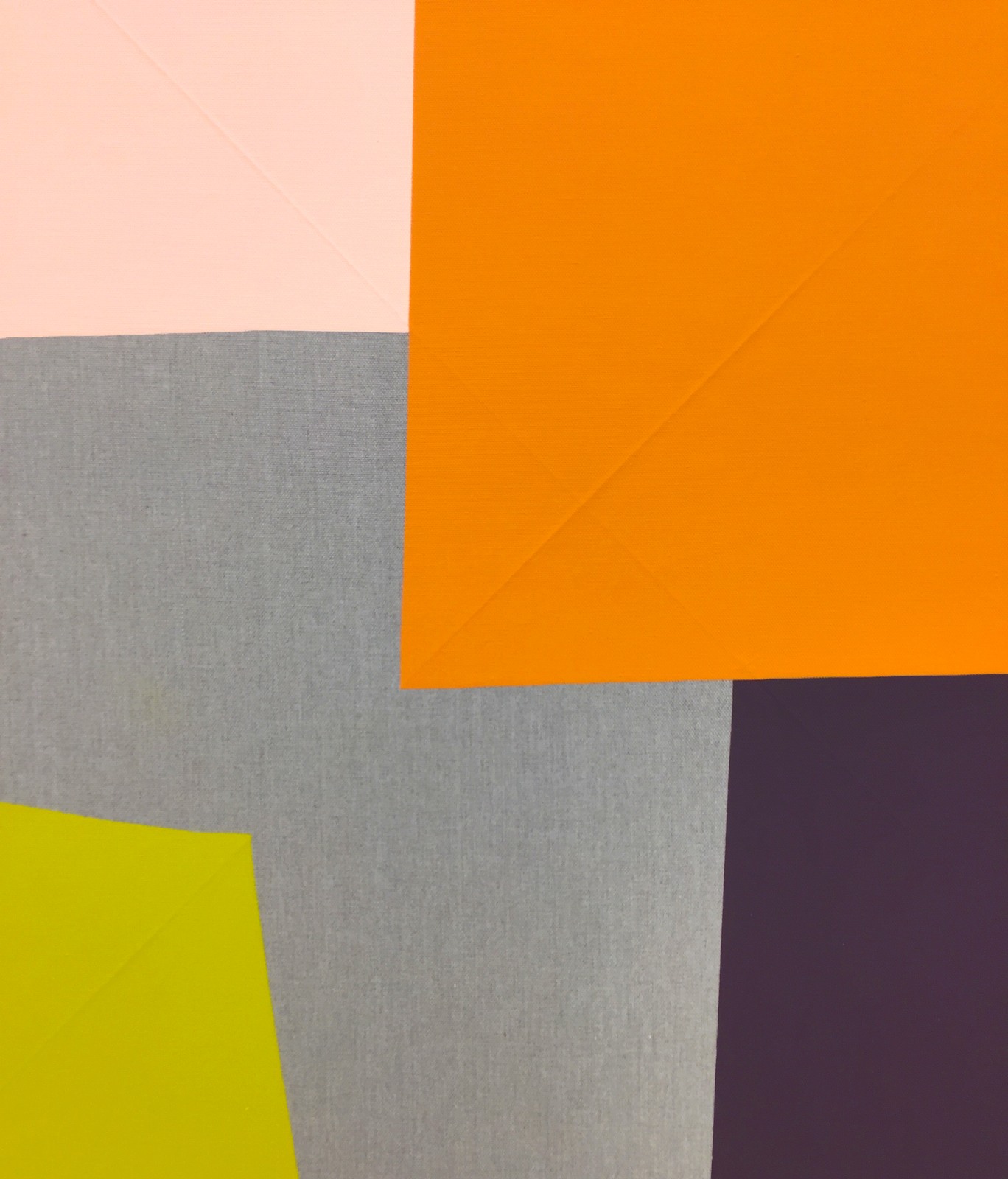 Finding new methods for application of color to various supports has been an ongoing interest for Katrine Giæver.

After several years of experimenting with compositions created by spraying and pouring enamel paints on aluminum plates, her works from the last years have mostly been executed with acrylic paints laid down with spatula in precise, overlapping shallow reliefs on hard surfaces like alucore and plywood. In several of these later works Giæver has lifted up and folded away some of the pictorial elements, as if to expose their underside and introduce diagonals in compositions otherwise dominated by rectangles.

In her new series Dip, inspiration for the method can be traced to the fundamental technique of dyeing fabric, where the immersion of textiles in a bath of pigmented liquid allows color to soak through the woven structure. A search for new flexible supports with an interesting texture led to readymade mats of coarse jute. The large mats have been hoisted up and dipped into custom-made baths filled with commercial household acrylic paints, then hung to dry and dipped again with a different color. This creates a sculptural painted object with identical bands of color on both sides, leaving a sizable amount of the raw jute as part of the composition.

Experimenting with repeated folding and dipping of sheets of paper showed the possibility of making more complex compositions, which Giæver has perfected in a series of smaller and medium sized works on raw linen canvas that have been dipped and mounted on stretcher frames. Traditional painting materials are given a fresh approach in these works with dense patches of color, reserved areas of untreated linen, and traces of folds.

With a nod to historic movements like the French Supports/Surfaces group of the late 1960´s, while also in touch with current trends in abstract painting, Katrine Giæver continues her exploration of the inherent properties of color. She builds images from a preconceived set of rules and methods that allow a generous amount of leeway for chance.

Katrine Giæver (b 1960 in Tromsø) was educated at the Academy of Arts and Craft in Oslo 1983-87 and Visva Bharathi University in West-Bengal, India 1987-88. She is represented in The National Museum for Art, Architecture and Design in Oslo as well as numerous corporate and private collections. Over the last years she has completed several public commissions. She lives and works in Oslo.