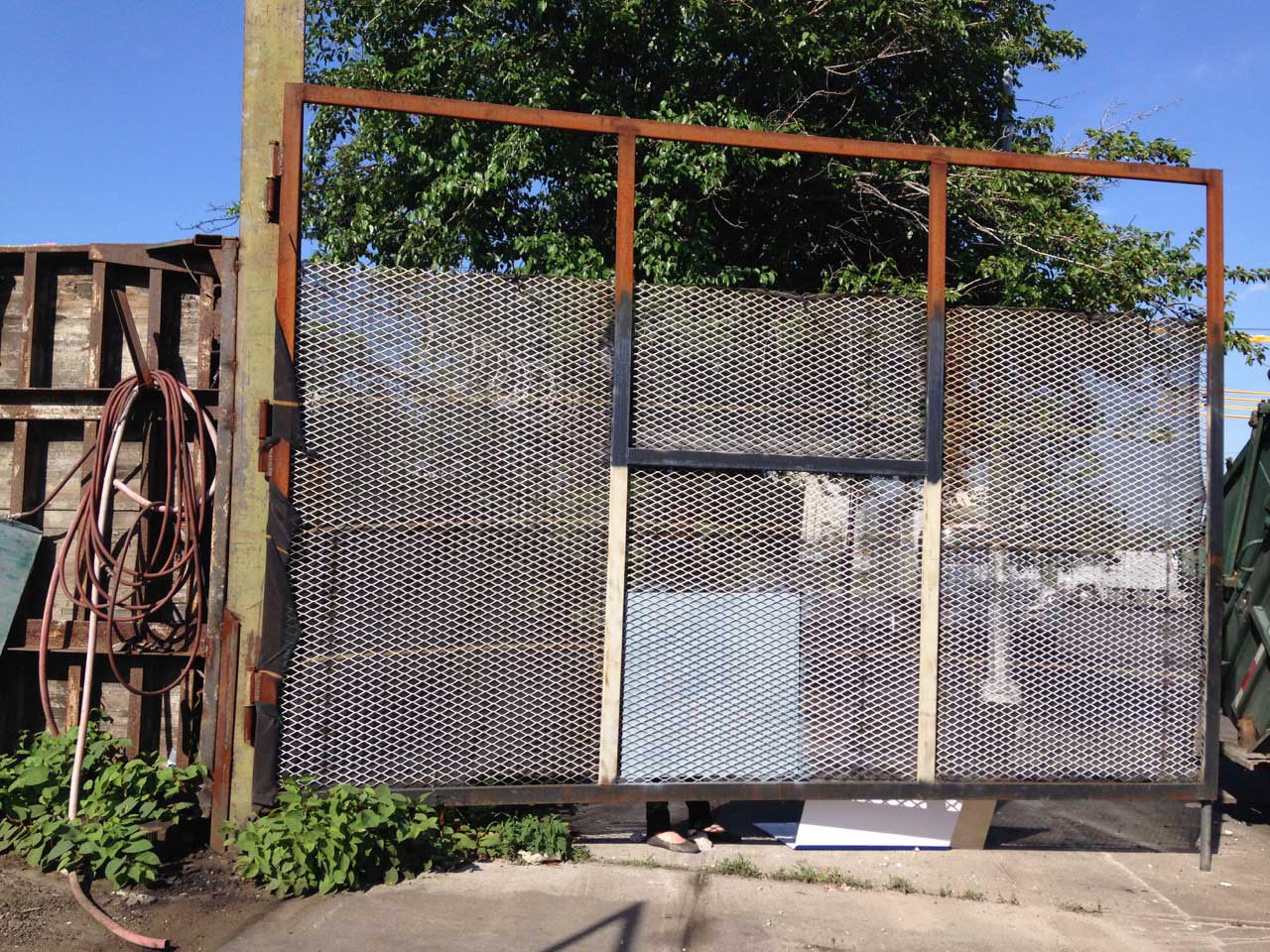 The city is not only language, but also a practice.
Henri Lefebvre, The Social Production of Space

A line of trees bordering a street in Brooklyn has been individually framed in plywood, and then clothed in bright orange plastic mesh. The trees are thus transformed into ubiquitous signs of construction, of the city as it gentrifies. This is no longer a place to walk. This is a place where you cannot touch the trees. Your dog cannot read the passage of friends and rivals in traces of piss on exposed roots. This space is being used for something else, a machine process to re-design the urban environment.

Kristina Matousch carries a thin plate metal square into this landscape of protective material. She slips it behind the mesh and then sprays blue paint across her juxtaposition. When withdrawn, the metal plate is stenciled into a negative relief of mesh patterning. The plate is also study of what could not be touched with paint in public, or semi-public, space. It marks some limit to understanding both the city and the body's relationship to it.

A stain is foreign to whatever surface it appears on. It is a mark illegitimately placed. It is the trace of some meeting between substances that should have been kept far enough apart that they could leave no evidence of their relationship. Matousch's spray-painting stains both the metal plate she brings with her into the street and the site of her painting. There is a third level of staining at work here as well: the paint is fragile. It scratches when Matousch moves the plate after marking it. Dirt and debris cling to it from the street and becomes imbedded in the surface. The street imposes itself on any collision Matousch's paintings perform.

Matousch pictures something philosopher Henri Lefebvre also articulates: it is not possible to make pictures of the city as a deep thing, a logic, a unit of space-time, without simultaneously making a picture of the body. This second kind of picture requires a profoundly physical process. It is to this process that Matousch's work attends.

Lefebvre argues that the city has been killed by an analytical practice. He means that the urban in its chaotic, generative form has been destroyed by the modern separation of space according a rational plan for managed use. What is needed, according to Lefebvre, is a synthesis, or some threshing back together of the city as a map (language) and the city as a set of social spaces (practice). This is not simply the re-introduction of space on the scale of the body, but rather the re-inscription of the body in the discourse of space. The first could be achieved through an addendum to urban planning policies, while the second would require the body to precede the plan, to draw the plan with its gestures, to make the space.