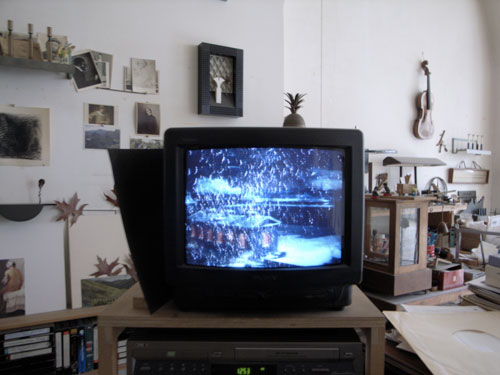 In our project space, the artists Niki Logis (b. 1941, USA), Daniel McDonald (b. 1971, USA), Eline Mugaas (b. 1969, Norway) and KimSu Theiler (b. 1970, USA) present the exhibition Fake Snow. The artists met as students and teacher at The Cooper Union in New York in the beginning of the 1990s, and have been friends since. The exhibition's point of departure is Logis' longlasting fascination with the movie industry's need to produce artificial snow in order to convey poetic experiences, and the contradiction and “impossibility" inherent in this task, which she compares to that of making art: Even as children we knew that what nature and human beings had botched only Art could make delightful.

In the project space, a panorama of styrofoam blocks will be built, and edited snow scenes from different movies will be shown on walls and monitors. The cuts are treated by themes, such as Magic snow, Bloody snow, Floating ice and Lost wandering. That the exhibition debuts in Norway, where the audience has vast experience with real snow, gives the project an added poetic dimension.