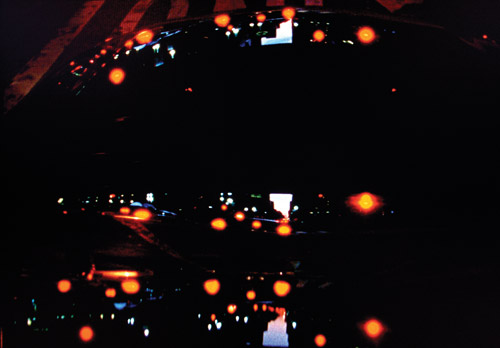 Galleri Riis will on Thursday February 28th open its fourth exhibition with the artist Eline Mugaas. Mugaas (b. 1969) received her artistic education from Ramapo College in New Jersey, and The Cooper Union for the Advancement of Science and Art in New York. She has in recent years made her mark as one of the leading Norwegian artists with photography as medium. Her works were last seen in the large exhibition “some cities” in Bergen Kunsthall last fall, where the theme was images from Belgrade, Oslo and New York City. Mugaas lives and works in Oslo and New York.

The exhibition “skin flick” in Galleri Riis is Eline Mugaas’ first film installation, and will fill the entire gallery exhibition space. The 22 minute long film is shown in large format in the space, and is accompanied by an ambient and asynchronous soundtrack with field recordings from the city. The film is in loop, and describes a nocturnal journey through a cityscape, with gliding, sensual, and at times abstract, images.