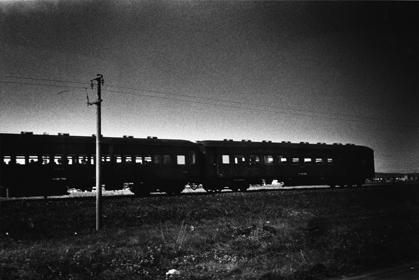 Galleri Riis is proud to present the second exhibition in our Stockholm gallery with the influential Japanese photographer Daido Moriyama (b. 1938 in Osaka). The exhibition consists of 30 large analogue silver gelatin photographs presented as one work from the series Hokkaido from the 1970's and 20 smaller new prints of classic motifs selected by Moriyama from the extensive publication The World Through My Eyes (Skira 2011).

In the gallery's first room we will exhibit a monumental excerpt from Hokkaido. In 1978 Moriyama rented an apartment in Sapporo, Hokkaido, for three months. He took about 2,000 photos during this time but the negatives remained untouched until 2008, when he began to edit the material and selected the images that together with photographs from previous visits became the massive book Hokkaido (Rat Hole Gallery, Tokyo 2008).

During his stay in Hokkaido, Moriyama suffered from depression, and a form of self-medication was to every day insistently photograph his surroundings. Moriyama's photographs are by his own account memories rather than documentation, they are déjà vu moments, timeless moments. The images include depictions of animals, animals that exude a kind of absurdity by their innocent gaze and isolation. Many of the images are difficult to place in time, as they radiate both dawn and dusk. Several of the photographs represent travelling of different sorts, trains, buses, boats and seemingly endless roads.The formal complexity of the images does not detract their beauty.

The images in the second room are a series of motifs compiled by Moriyama for this exhibition from various phases in his oeuvre, all displaying his range and originality. In his wanderings in the urban landscape Moriyama visualizes a tragicomic view of people's lives and environments. His work reflects the intersection of the post-war obsession with the West and traditional values of the East: in his imagery pop culture and erotica are juxtaposed with consumerist fetishes. Moriyama's mapping of urban life is hazy and twisted but timelessly beautiful and poetic. Even the most abstract and dissolved of his photographs exudes sensuality.

Moriyama is a constant source of inspiration for new generations of artists and through numerous publications he reaches a large audience. Examples from his voluminous book production are the continuous series Record and the groundbreaking book Farewell Photography from 1972. For Moriyama publications are as important as his exhibitions; in the books a full visual story can take shape.

In our showroom, we present examples of Moriyama's recent works in digital color photography. These images, all from Tokyo and from the publication Color 2008-2012, are prints in large format and contain the same intensive examination of the city's details and people as his earlier works.

For further information and images please contact the gallery.