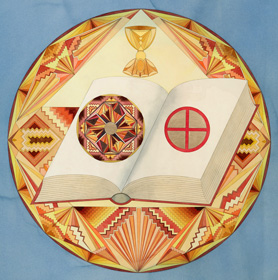 Oslo
Fredrik Söderberg
I am He who Buries the Gods in Gold and Gems October 10 – November 16, 2013

This is Fredrik Söderberg's first exhibition in Galleri Riis Oslo, and also his most extensive presentation of recent paintings so far, following up on some of the themes in his exhibition in our Stockholm gallery last year. Söderberg's work is largely inspired and informed by the spiritual, the esoteric and the occult, with references to such Buddhist traditions as tantrism and other oriental teachings. The western occult movements appearing at the end of the 1800s and beginning of the 1900s, with several of their initially obscure yet eventually influential protagonists, have also been a major source of inspiration and field for subjective mapping in Söderberg's oeuvre.

The title of the forthcoming exhibition (I am He who Buries the Gods in Gold and Gems) is a quote from Carl Gustav Jung (1875-1961), central to many of the works, especially in a series of monumental diptychs depicting the controversial psychiatrist, philosopher and mysticist's houses in Küsnacht and Bollingen outside Zürich. Söderberg views the stylized architecture of these houses as vessels containing Jung´s ideas, his activities and knowledge lodged in them. In a striking large-scale portrait of Jung he is embedded in various religious cultures and mythologies growing wild.

Another contemporaneous reference is the founder of anthroposophy, Rudolf Steiner (1861-1925), visible in the exhibition through a series of works interpreting his representatives of humanity Lucifer, Ahriman and Christ.

In many of the works a cosmic abstract expression is paired with an accurate figurative and archetypal style, incorporating pure and intricate mandala images inspired from Tibetan Buddhism and Native American nature religion and traditional crafts, all meticulously executed in watercolour, mineral colours and gold leaf.

For Söderberg the artistic work is a tool for meditation and concentration, connecting with inner life. Through the use of genuine colour pigments and precious metals combined with labour-intensive execution he approaches the alchemical and magical craft which imbues the finished artwork.

Galleri Riis, in collaboration with Edda Publishing in Stockholm, will in conjunction with the exhibition release a large-format art book containing Söderberg's Jung-related works with an introduction by the American writer, musician and Jung scholar Gary Lachman. The book will be launched with a talk before the opening reception, between Fredrik Söderberg and the artist, writer and publisher Carl Abrahamsson, moderated by journalist Eric Schüldt.

Fredrik Söderberg (b. 1972) lives and works in Stockholm. He was educated at Konstfack University College of Arts between 1995-2000 and The Royal Institute of Art, Stockholm in 2002. Söderberg contributed to the book Hilma af Klint: Nine Contemporary Responses, published by Moderna Museet and Koenig Books in connection with the Venice Biennale 2013. Söderberg is represented in several important private and public collections, including Moderna Museet and Magasin 3 Stockholm Konsthall. With Carl Abrahamsson, Söderberg operates Edda Publishing that specializes in esoteric literature.