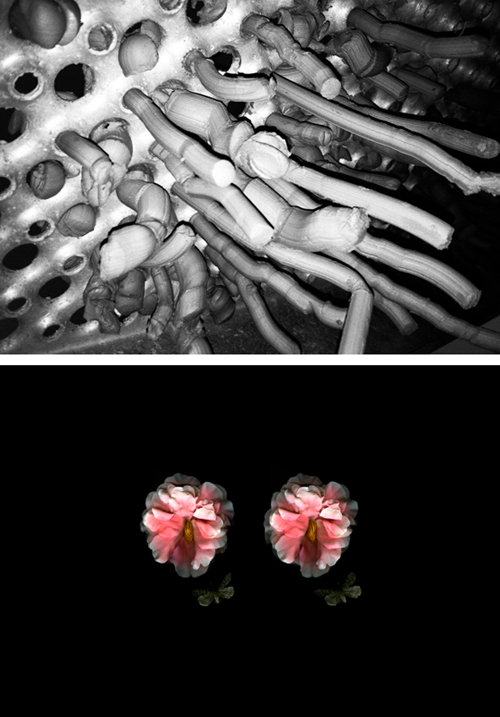 Kristina Matousch's art prompts contrasting feelings in the viewer. Attraction blends with disgust in the face of a materialistic age in which satisfaction shall be obtained by means of comsumtion (of possessions, relationships, the cheap meat, art, bodies) leaving us with a bulimic sensation and emptiness which creates a desire for more. Her works are reduced objects with sharp edges, holes and a perfect surface imbuing sexiness and desire. They are hard and impregnable, often with a subtext of dark humour. One illuminating example being the piece Cutting Cunt, an image of the female sex shaped as a throwing star made of stainless steel. In this exhibition Matousch does a performance and an installation titled Still Life Production. A machinery where tons of clay is squeezed through perforated steel plates, resembling a monumental document shredder, however for stuff. The work can be seen a manifest of methodically processing feelings and experiences, to take on and control the shit instead of letting the shit take control. It also holds an obvious ambivalence over ones own existence, of the objects and desires created by the artist.

In 1981 Dan Wolgers made the work Låda – his old toolbox that after a push of a button buzzingly opens its lid ajar only to quickly and evasively shut itself, refusing to reveal its content. Frustrated by the lack of satisfaction, the viewer is forced to reflect on his own actions and the transience in the promised - which in itself give satisfaction (and will urge pressing the button over and over again). Ever since, Wolgers has by his own account, used the same tools and the same trials in his research of the social machinery and of the human existence. His process is characterized by speech and thought, by turning and twisting all artistic syllables and meanings, airing all possible and impossible nooks and crannies. In the exhibition Wolgers presents a series of original three-dimensional images that with their bodily theme corresponds with a suite of mobile sculptures. The initially two-dimensional images receive depth and space when viewed cross-eyed. Alongside are the mobiles, that when set in motion by the viewer, animate the air, chime and rattle. With the title De Profundis or The First Meeting, they are all dedicated to sexuality, the erotic and the reproduction.

When Galleri Riis now presents an exhibition with Kristina Matousch and Dan Wolgers it is based on their mutual attitude towards artistic work and a shared interest in art and its function in society. Both artists extensively use the human body as conveyor for their artefacts - the body with its demands, lust, needs and flaws. The works by both of the artists have been made for this exhibition, and have been imparted by intense dialogue and shed light on their personal and artistic positions. The exhibition encircles the implications and meaning of being a human being amongst it all and to be ambivalent towards what one is and what one does.

On the opening reception April 4th Kristina Matousch will execute her performance between 5 and 8 pm.