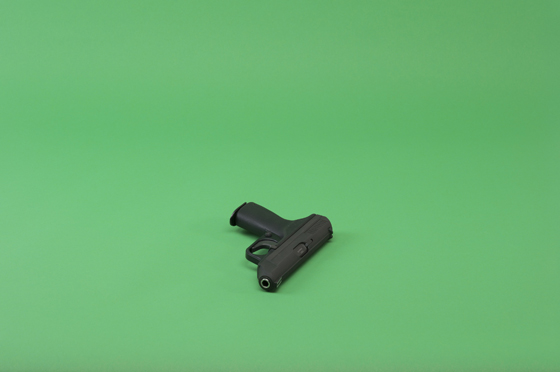 Galleri Riis is pleased to present enclosed circuit, Morten Andenæs¹ second show with the gallery. It consists of 35 new photographic works from his ongoing project Regarding the Middle Class and can be viewed in opposition to his exhibition observance in 2011. Up til now, the works in this project have been marked by a consistent yet undetermined point of view. The reproductions of scenes from everyday life, people and objects have been sober and apparently neutral. The images have mirrored a gaze, an attitude and a stance which tries to domesticate the world without admitting to this motive. Thematically the project has dealt with the constraints, both in the sense of responsibilities and "liberties" imposed on the individual by the family and society, as well as the ensuing violent impulses such restrictions and straightjackets might cause. The viewer enters a seamless illusion of reality, analagous to the way the situation or thing was perceived originally. This sense of presence creates both a closed circuit and a kind of recognition; we see the image, and in turn we ourselves are seen.

Although the overarching theme is the same, the exhibition marks a shift in his project¹s direction. Rather than mirroring a specific gaze or stance, a main concern of this exhibition are those things which do not easily lend themselves to photographic representation - such as pain, sound, or the lack thereof. Referenced here is the role photography played in the late 19th and early 20th century with regards to classification, the creation and fixing of identity and the drive towards making the invisible visible. The latter becomes evident in an oversized image of a female subject undergoing a clinical trial about pain at the National Institute of Occupational Health.

At the centre of this exhibition is an extract from a series of handguns against a chroma-green background, a "greenscreen". Here, violence and fantasy are no longer just implicit as destructive potential or unfulfilled desire, but become an injunction and public spectacle. At the same time the systematic approach, especially visible in the serial works on display, point towards another kind of violence: In order to avoid the chaotic and potentially shattering ambivalence at the heart of language and images, things are forced into categories; not based on intrinsic properties but on the grounds of superficial markers. Nina, as a recurring title in differing works, becomes such an instance. Without any explicit connection between them, a short circuit may occur.

Morten Andenæs (b. 1979) studied at The School of Visual Arts in New York, and currently lives and works in Oslo. Andenæs´ first major book will be launched on Saturday 6th of April. SKYLDFOLK will be published by Teknisk Industri i cooperation with Galleri Riis.

Between 2-4 pm on Saturday 6th of April, Galleri Riis and Teknisk Industri AS have the pleasure of hosting a book launch for Morten Andenæs' first book project SKYLDFOLK. During the launch there will be a talk between Morten Andenæs and Stein Bråten, starting at approx 2.30 pm.