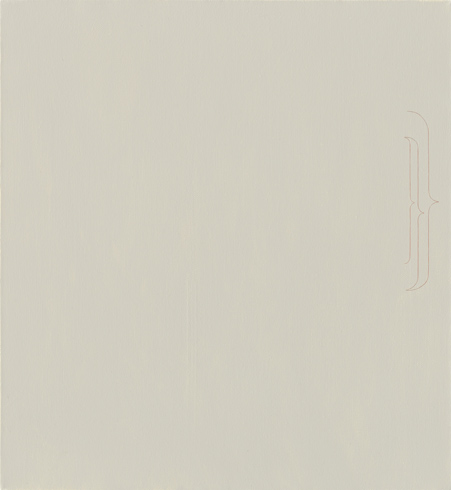 In this new series of paintings, which includes 60 thematically coherent paintings, Lars Monrad Vaage (born 1973) breaks away from the figurative and narrative language, which up till now has dominated his production. These paintings have been made over the last year, all oil on canvas, measuring 60 x 55 cm. A drawing made by copper coloured thread is laid into the finely painted monochrome surface, with a meticulous and artisanal method, a trademark for all of Vaage's works. The colour scheme is subdued and navigates a grey/green theme with a slight nuance difference from painting to painting. All pictures are painted in a colour composed from the three primary colours, added other colours black being the exception. In each consecutive painting, Vaage tried to copy the colour shade from the previous one. The elaborate process demands a reflection from the viewer.

The small variations are also evident in the thread that lays vertically in the same structure on the right side of the picture plane. The inspiration for these drawings comes from a double bracket the artist noted in Ludwig Wittgensteins Tractatus Logico-Philosophicus. The philosopher used the double brackets in order to define logical terms such as "and", "or" and "if only", laying bare the essence of language. Where Wittgenstein sought to delimit in use of the brackets, Vaage - as the exhibition title suggests - does the opposite: Adding a third bracket, and working from the smallest to the largest, he suggests a never ending project where new brackets will try to encompass an ever expanding void. Within the rigid structure, and through the self-assumed limits in method and material, arises subtle variations with a rhythmical process and mysterious patterns.

Lars Monrad Vaage went to KHiO and Kunstakademiet in Helsinki. His last solo exhibition was Fruit and Futurism in Galleri Riis 2009. In parallel with the current exhibition in Galleri Riis, Vaage shows a selection of works from the this new series at Østfold Kunstnersenter in Fredrikstad.