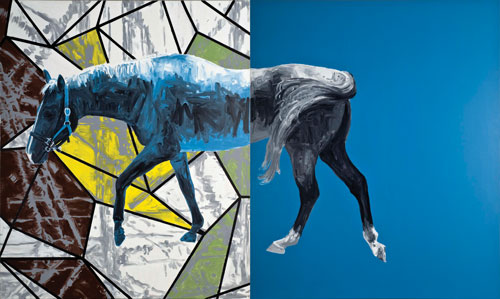 Galleri Riis opens on Thursday, October 30th its fourth exhibition with the Danish painter Troels Wörsel (b. 1950). Wörsel moved to Germany in the late 1970’s, and has since then been part of the Scandinavian and European art scene. He is represented in the collections of a.o Städtisches Kunstmuseum in Bonn, Louisiana Museum of Modern Art in Humlebæk, Washington Museum of Art, Centre Georges Pompidou in Paris and Museum of Modern Art in New York. Wörsel was in 2002 the first-prize winner of the Carnegie Art Awards, and was Denmark’s representative in last year’s Venice Biennial. Wörsel lives and works in Cologne.

Wörsel is conscious of the constructive problems and aspects of painting and of its limitless possibilities. In the new works in Galleri Riis, Wörsel is preoccupied with the perceptual problems related to the duality of paintings as both representing something visible, and of literally having to be seen. However, as the artist himself says: "Trying to paint from perception entails, of course, the parallel perception of the painting as it evolves. Perhaps I could say I’ve tried to continually replace the first type of perception by the second." The exhibition at Galleri Riis is comprised of paintings in large format, all from 2008, and executed in acrylic on canvas.