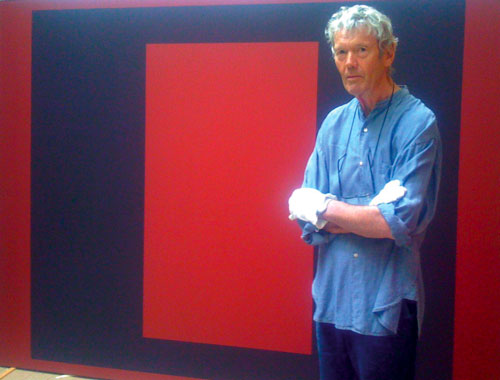 Arne Malmedal (b. 1937) has been an important figure on the Norwegian art scene. As founder and leader of the Faculty of Graphic Art in the Academy of Fine Arts in Oslo in the 1970s, and as Administrative Director at Kunstnernes Hus in the 1980s, he contributed to the realization of a series of important exhibitions. He was educated at the National College of Art and Design, Oslo (1956-60), and held his first one-man show in 1963. Malmedal was honored with a large retrospective exhibition in the then-called Museum of Contemporary Art in 2003, an exhibition which travelled to Bergen Art Museum in 2004.

In later years, the work has focused on the painting, and Malmedal’s current activity is marked by exploring and experimenting with space/plane, picture/frame, color/brush stroke in a series of monochrome paintings.

The works in this exhibition (his second in Galleri Riis) are all in large formats, from the period 2008-09. The character of the color is central in the paintings, which are dominated by red in this exhibition, and where the compositions borrow inspiration from Josef Alber’s Hommage to the Square and the late portals of Mark Rothko. The extremely finely worked monochrome surfaces vibrate in their layers, and create a space into which the beholder is drawn.